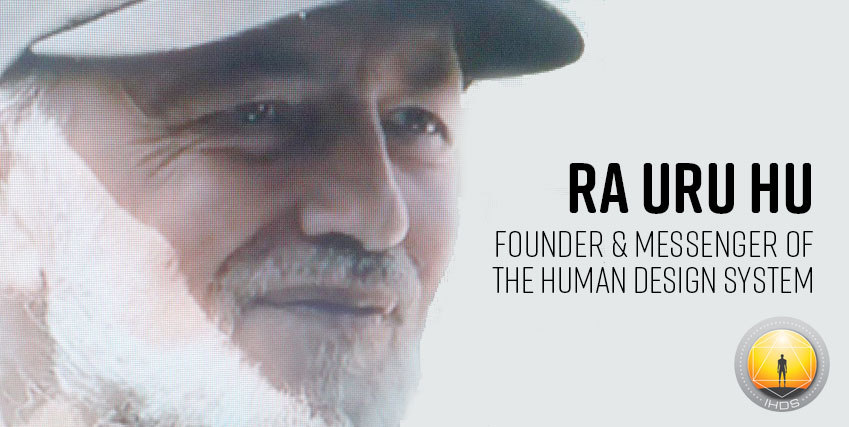 As part of his work as the messenger, Ra established the International Human Design School.

Ra Uru Hu, born Robert Allan Krakower, was the fourth child of a cultured, upper middle class family from Montreal, Canada. He was surrounded by the arts and learned to express himself through music, an avocation he pursued until his death. He completed a Bachelor of Arts Degree at Sir George Williams University, but his career path led him into the business world as an advertising executive, magazine publisher and media producer.

One morning in 1983, he simply walked away from his family and fast-paced life as an entrepreneur - from life as he knew it - and "disappeared." Several months later he found himself on the beautiful and temperate island of Ibiza in the Mediterranean Sea off the eastern coast of Spain. This 'Eden,' as he likes to call it, is where his 'real' life, his life as Ra Uru Hu, had its beginnings.

On the evening of January 3, 1987, he encountered the 'Voice'. It was a terrifying experience. The Voice said: "Are you ready to work?" And for eight days and eight nights he worked, transcribing in detail what is now known as The Human Design System. Ra speaks of the encounter as a wake-up call, an education which showed him how blind and ignorant his assumptions were about the nature of being, the cosmos and the way things work.

Ra considered himself the messenger of The Human Design System, now his legacy, and dedicated his life since the encounter to disseminating the Science of Differentiation around the world. He settled, lived and worked in Ibiza where he enjoyed teaching, playing music, gardening and spending time with his wife, three children and his grandson.

The IHDS Endowment is a special educational service of The International Human Design School.

Projectors are designed to master systems before they can truly recognize and be recognized.

Human Design recognizes the unique learning curve required by Projectors before they can fully begin to live out their experiment.

Unlike energy Types, Projectors require extensive education which can be expensive. IHDS is pleased to sponsor the Projector Endowment.

If you are a Projector you are entitled to a 20% discount on selected IHDS products and services.

As more and more young people are being attracted to the knowledge and its life transforming mechanics, IHDS recognizes that younger students seeking to enter an educational program may face material obstacles. Given this, IHDS is pleased to sponsor the Saturn Endowment. If you are under the age of thirty years you are entitled to a 20% discount on select IHDS products and services.

To register for an IHDS Endowment please send us an email with Projector Endowment or Saturn Endowment as the subject with your Birth Data included to: office@ihdschool.com

This IHDS course has the following Pre-Requisites: